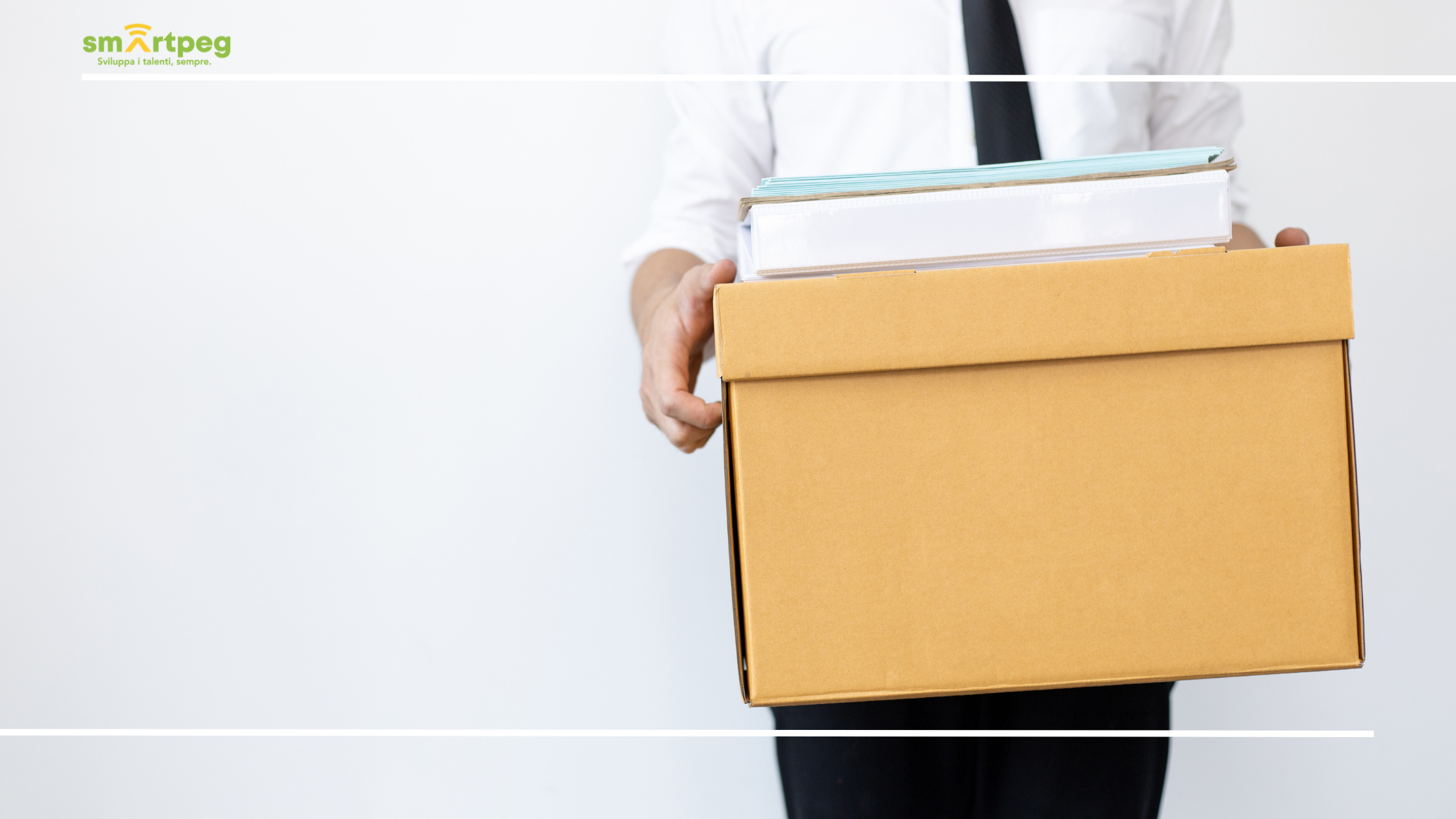 More and more, in Italy, there is talk of the phenomenon of large resignations: what it is and how to counter it

Once upon a time ... there was a steady job , an ambition that has influenced the choices of entire generations for decades: but something has changed.

The traditional work structure, highly hierarchical and based on performance and productivity, has started to creak and today, after two years of pandemic, we are witnessing a transformation that shakes it to its foundations.

Big resignations: where did they come from?

The phenomenon of the great resignation originated beyond the Atlantic Ocean and is also known as "Big Quit" or "Great Resignation.. In essence, this is an unprecedented wave of workers resigning. In 2021 there were 25 million of which 4.5 in November alone. a much shorter range, this phenomenon has also arrived in Italy.

In Smartpeg , a leading company in the Human Resource Management sector, thanks to its consulting services and use of dedicated tools is able to help companies retain their talents.

According to data reported by the US Bureau Of Labor Statistics , in the United States alone in July 2021 as many as 4 million people gave their resignations. In the previous months, however, there was a constant growth (April 2021 the maximum period) of people who have decided to leave their jobs.

At the same time, a research carried out by the Harvard Business Review , on 9 million workers of about 4,000 companies, revealed two elements:

The great resignations in Italy

According to the 5th Censis-Eudaimon Report on corporate welfare (released in March 2022), in Italy the phenomenon of large resignations is not as widespread as abroad.

In fact, 56.2% of employed people do not think at all about quitting their jobs, in the belief that they would not find a better job than the current one.

A longer-term trend of growth in resignations is therefore confirmed, linked to the increase in the precariousness of employment relationships. Among Italian workers, pragmatism wins over the temptation of Great Resignation , that is, resigning in the dark in search of a more rewarding job or to do other things. Still, among Italian workers, the idea of ​​finding themselves mired in the precariousness of the labor market is more frightening.

This, however, does not at all mean that Italian workers are satisfied:

Beyond the great resignations: 4 actions to stop this phenomenon

So the term "Great Resignation" can be misleading.

Well-being: how to achieve the well-being of your company?

Do you know how to make your company well-being?

To offer solutions to companies it is important to be in tune with their needs, for this we have created Ritmo : the consulting process that, starting from the analysis of the current situation, offers your company solutions and HR strategies.

What do you get with Ritmo advice?

The consulting process that, starting from the analysis of the current situation, is able to offer your company adequate HR solutions and strategies.

With our path you will know at what Ritmo to set the best time to reach the objectives. The people who work in the company also need a project that gives rhythm to their talents.

Smart Test is the first step to enter the world of Ritmo! The completely free test that examines the strategic variables of your HR management, comparing them with other companies in the same sector.

Fill out the Smart Test now and get the complete report of your business situation, with a graph that will show you:

START WITH THE SMART TEST

Smart Assessment is the second step of the consultancy and involves the photograph of your business organization to define the starting scenario:

Starting from the results that emerged with Smart Test, we create an anonymous questionnaire to be administered to the entire company population, focusing on the dimensions that best suit you interested in improving and / or developing:

"Let's observe ourselves to improve"

Smart Evolution is the third and final step of the Ritmo consultancy. On the basis of the results that emerged from the previous steps, the appropriate actions are triggered and the following are built:

We trace the road map of the actions to be implemented, then sharing them with the entire company population. Greater employee involvement is synonymous with increasing people's motivation, participation and loyalty.